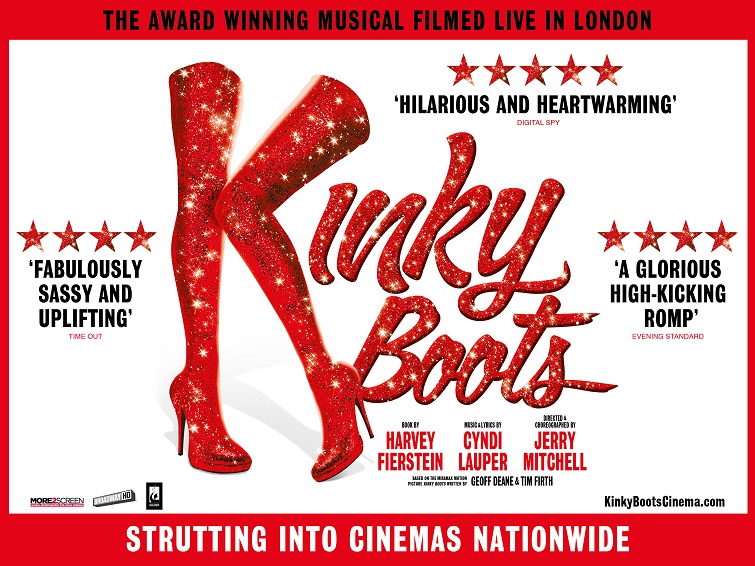 Rescheduled from 9 February, when the cinema was closed due to flooding.

Paper tickets from 9th February will be valid on 5th April (but please email frontofhouse@hebdenbridgepicturehouse.co.uk to confirm you will be using your tickets and confirm the ticket number). Online bookers have been refunded via TicketSource and can re-book for the new date now.

Enjoy a Live Arts event with content broadcast or recorded live from the National Theatre, The Royal Opera House and the RSC amongst other great content providers. Advance booking is recommended.

Kinky Boots The Musical, filmed live at the Adelphi Theatre in the heart of London’s West End, is strutting onto the big screen! With songs from Grammy and Tony award winning pop icon Cindy Lauper, book by legendary Broadway playwright Harvey Fierstein (La Cage Aux Folles), and direction and choreography by Jerry Mitchell (Legally Blonde, Hairspray), the musical is based on the film written by Geoff Deane and Tim Firth.

Inspired by true events, this huge-hearted hit tells the story of two people with nothing in common – or so they think. Charlie (Killian Donnelly) is a factory owner struggling to save his family business, and Lola (Matt Henry) is a fabulous entertainer with a wildly exciting idea. With a little compassion and a lot of understanding, this unexpected pair learn to embrace their differences and create a line of sturdy stilettos unlike any the world has ever seen! But in the end, their most sensational achievement is their friendship. This unmissable musical theatre event celebrates a joyous story of British grit transforming into a high-heeled hit as it takes you from the factory floor of Northampton to the glamorous catwalks of Milan!

‘Hilarious, heartwarming and a hell of a lot of fun’ DIGITAL SPY
‘An absolute hoot of a show’ THE TIMES
‘There’s no business like shoe-business’ THE GUARDIAN
‘The thigh’s the limit for Cyndi Lauper’s kinky kick-ass show’ METRO
‘Dazzling, fabulously sassy and uplifting’ TIME OUT