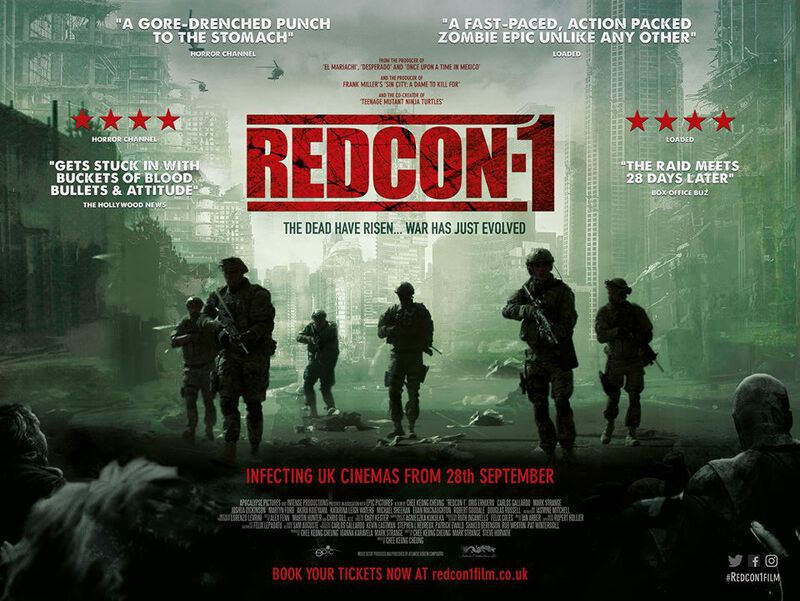 After a zombie apocalypse spreads from a London prison, the UK is brought to its knees. The spread of the virus is temporarily contained but, without a cure, it’s only a matter of time before it breaks its boundaries.

With the South East of England quarantined from the rest of the world using fortified borders, intelligence finds that the scientist responsible for the outbreak is alive and well in London. With his recovery being the only hope of a cure, a squad of eight Special Forces soldiers is sent on a suicide mission to the city, now ruled by the undead, with a single task: get him out alive within 72 hours by any means necessary. What emerges is an unlikely pairing on a course to save humanity against ever-rising odds.

Bursting with action, violence and a huge cast of zombies, Redcon-1 is a thrill-ride of a film that will leave you breathless with its take-no-prisoners approach.

The production of Redcon-1 saw filming take place all across the UK in 12 different cities, including Glasgow, Edinburgh, Manchester, Lancaster, Preston, London, Stafford and Rugby, amongst others.

Chee Keong Cheung- Writer/Director/Producer
Born in the UK, Chee’s family background resides in China. Having proven his aptitude for high-octane action cinema and riveting, character-led drama with his first two feature films ‘12’ and ‘Bodyguard: A New Beginning’ and now his latest feature film the action, zombie horror war film ‘REDCON-1’ Chee Keong Cheung is one of the most exciting up-and-coming action filmmakers in the business today, and continues to redefine the perceptions of action cinema through evolving, ambitious projects.

Carlos Gallardo- Executive Producer/Actor
Carlos is best known for producing and starring in the classic feature film ‘El Mariachi’, directed by his close friend Robert Rodriguez. Following his success with ‘El Mariachi’, Carlos proceeded to work as an actor and co-producer on ‘Desperado’ starring Selma Hayek and Antonio Banderas. He then went on to produce the third film in the trilogy ‘Once Upon A Time In Mexico’, starring Johnny Depp, Mickey Rourke, Willem Dafoe, alongside Selma Hayek and Antonio Banderas once more. Carlos plays Sergeant Frederik Reeves in REDCON-1 and also serves as Executive Producer on the film.