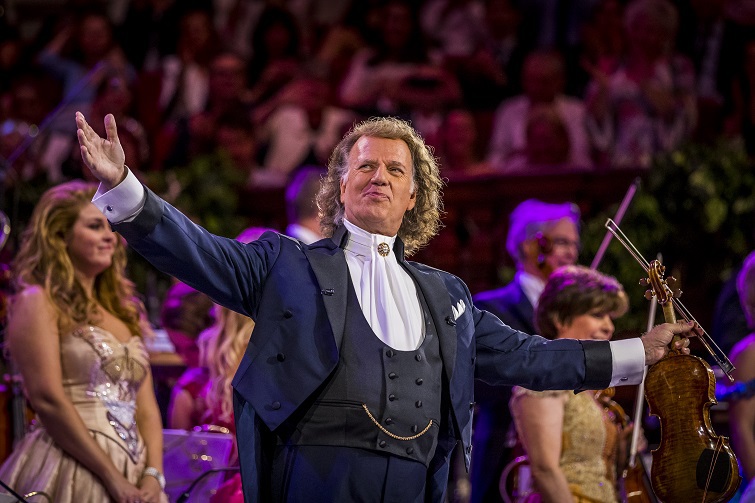 2019 has begun emphatically for The King of The Waltz, André Rieu. His first ever New Year’s concert grossed an incredible £1.922 million in the UK alone – the biggest opening weekend recorded for a music concert in cinemas – proving once again that he is one of the greatest entertainers on the planet. Now, André will take things much closer to home as he announces his annual summer cinema event from his hometown of Maastricht in the Netherlands. It is without doubt the music concert cinema event of the summer!

For 2019 André is asking Shall We Dance? as he invites you to join him in the comfort of your local cinema, welcoming you into the beautiful and historic town that holds such special memories for both André and his fans throughout the world. Performing live from the stunning medieval town square, André is accompanied by his 60-piece Johann Strauss Orchestra, who he has travelled the world with for over 30 years, as well as a cast of over 100 dancers.

Andre commented, “Once again I am delighted to welcome fans from across the UK into my hometown of Maastricht, through their cinema screens in 2019! It is a magical way of seeing what for me every year is a wonderful occasion! This year will be extra special – performing the music of my heart: the Waltz. Come and join us for “The Beautiful Blue Danube” and many more surprises, some of which we will reveal during the next weeks to come! I want to see everyone waltzing in the cinema aisles!”.

With special guests, surprises, as well as some renowned sopranos and tenors, André will this year celebrate the true music of a heart which beats in ¾ time – the Waltz! A highlight of the year for so many, André’s cinema concerts are unique with the warmth and energy being beamed direct to audiences. Hosted by Good Morning Britain’s Charlotte Hawkins, the concert will also take audiences behind the scenes, as well as an exclusive stage-side interview with André!